We have news! The drone is finally active and getting very cool digital terrain images. This means also that Juri is able to join us now in the field. Indeed, he has stayed inside the station for more than a week!
Yesterday, we went to the Dry Valleys where we could finish sampling the OTCs and snow fences plots there.

Because of the big difference in snow cover that we are encountering this year, compared to the previous ones, we were even able to find one of our data loggers that we considered lost (we placed it in January 2018). During the past week, the weather was amazing, with temperatures around the station reaching positive degrees… the sunny days clearly make all the field work much easier! This was also the case in Pingvinane, a nunatak where Valentina and Bea went on the 22nd of January. There, the snow coverage was incredibly low and we were able to sample all the plots very fast. It is a very beautiful site!

Finally, that day, we also went sampling some biological soil crusts or biocrusts on the Utsteinen ridge, which is very close to the station. The biocrusts are communities that colonize the soil surface and are composed by different organisms such as, lichens, fungi, cyanobacteria, heterotrophic bacteria, mosses, algae or microfauna. In the following picture, there is one of the beautiful biocrusts we found there. These communities are very well adapted to survive under extreme conditions such as those in the Antarctic, other polar regions or hot deserts. Their conservation is very important because they play a main role in these ecosystems, for example increasing soil fertility and stability. They are very susceptible, among other things, to trampling, so don’t bust the crust!

We have still good weather in Antarctica, so we have been able to continue the sampling last Saturday and today. On Saturday, we went to the nunatak Perlebandet, which has amazing views from the top, as you can see in the picture. There, we have spent the whole day retrieving data loggers left last year and sampling OTCs.


Today we have visited the Dry Valleys. There, apart from the OTCs, we have a different experiment. There are two snow fences installed (see picture) in perpendicular direction to the wind, so that the snow accumulates behind. This allows us to simulate a climate with higher snow precipitations.

We start the field work!

Today we could start visiting the study sites! Valentina, Quinten and Bea went with Raphaël (the field guide) to Yuboku Valley in the morning. Part of the lakes were not frozen and Valentina could measure the photosynthetic activity of the cyanobacteria living under the water. We also retrieved the i-buttons that are continuously recording the humidity and temperature since last year and sampled some of the dry and wet cyanobacterial mats.

As we finished early, we went to the other field sites on theTeltet nunatak and the Utsteinen ridge. There, we have dug out a part of the snow covering the OTCs and let the rest melting. So, when we will come back another day, we will be able to take soil samples. An Open Top Chamber (OTC) is a hexagonal open chamber made of transparent plastic to let the sunlight go through it. Due to the decreased cooling because the plexiglas protects from the wind, it produces an increase of temperature as is expected from climate change. However, this is not the only effect, as the snow might accumulate and does not melt so quickly. We have often encountered this problem and found that the solution was to remove a part of the snow but taking care not to touch the bottom. Then, the chances are great that at our next visit, we will find that all the snow is melted. This allows to retrieve the i-buttons measuring temperature and humidity, but also to take samples if we need.


Juri, our drone man, has been making the last adjustment of the drone that we will bring with us the next days to the field. He could make some trials this evening, see the amazing picture he took!!

Arrival at the Princess Elisabeth Station!

We are very happy because we finally arrived at the Princess Elisabeth station on the 13th of January! After a first boomerang flight on the 9th of January (see precedent blog), this time everything went well and we landed in Novo airfield. Besides, we only had to wait for 2 hours at Novo to take the next and last flight until the Princess Elisabeth station. A perfect time to arrive for dinner, meet our new family during the following weeks and rest before starting the trainings.

Due to the windy weather during the first days, the trainings were postponed until the 15th of January, when we did the skidoo, medical and GPS trainings. These are basic knowledges we need every time we go to the field, as we use the skidoos to reach almost all the study sites.

We also need to use the GPS to find the tracks we want to follow and the radio to be in contact with the rest of the group or the station. The 16th of January, we did the crevasse training. Crevasses happen when the holes produced by the ice movement are covered by a thin layer of snow. Therefore, they are not visible and if you walk over them, you might fall inside. In our case, it is not probable that we will find one, but it is good to learn the procedure to rescue someone that could have fallen. In the picture, you can see how each person went into the crevasse and the rest of the group has learnt how to pick him/her up. Being inside is really amazing as the crevasses are beautiful!

Dear readers,
Our Antarctic colleagues have published an asssesment of the species that are likely to present the highest risk to biodiversity and ecosystems within the Antarctic Peninsula Region over the next 10 years. The higher risks are due to climate change and increasing human activity.
https://onlinelibrary.wiley.com/doi/pdf/10.1111/gcb.14938

The authors recommend to develop and apply effective biosecurity measures across all national operators and the tourism and fishing industries, and for surveillance and appropriate rapid response action for introduced species, such as those identified during this paper.
Note that a similar potential for introduction of non-native microbial species is existing in Antarctica but is more difficult to determine and mitigate, due to the fact that the identification of microorganisms requires the use of specific molecular methods.
Thus, food for thought!!
at January 17, 2020 No comments:

MICROBIAN team is ready to go!

After the last unsuccessful trial, we are going to take off to Novo station in one hour with the russian Ilyushin plane.
We are so excited to finally go, for some of us (Bea and Juri) is the first time in Antarctica!

We'll get back once at PES, stay tuned! 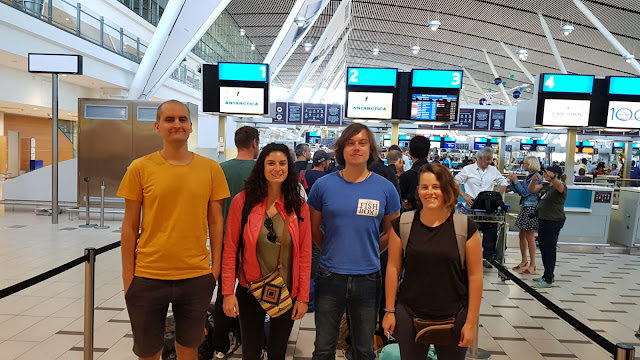 Yesterday night (9 January), we took the flight heading to Antarctica. The flight had already been delayed of one hour as you can see on the picture of the timetable. 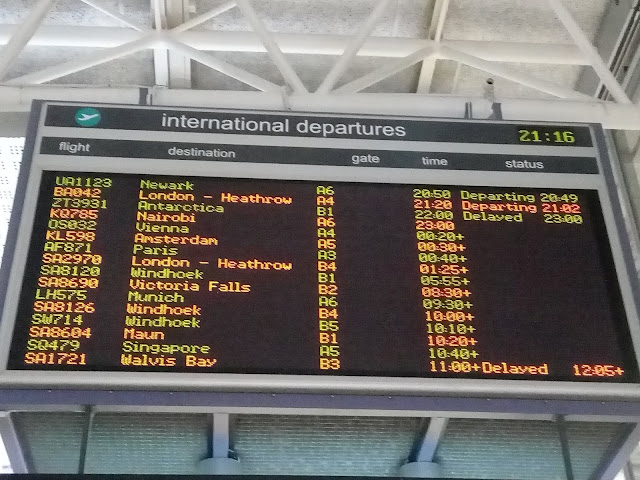 After flying for more than 4 hours, we were informed that the weather conditions in Novo were not allowing the pilot to land. Therefore, the plane turned and we headed back to Cape Town. We now have to wait until Sunday/Monday - we will keep you posted, hoping to leave asap.

the MICROBIAN field team
at January 10, 2020 No comments:

Private première of the documentary "Observations at 65° South" in Brussels

Friday 10, the private premiere of the documentary "Observations at 65º South” has been organised in Brussels.
"Marking the 121st anniversary since the first Antarctic expedition in human history, an international team of nine scientists embark on a journey to the frozen continent. Their choice of transport: a small sail boat." (https://www.kickstarter.com/projects/1046638241/belgica-121-sailing-a-science-expedition-to-antarc). The documentary was supported in part by contributions on kickstarter. The director was Lilian Hess and Franz Maximilian Heindler had been trained to film with the camera. They also had beautiful images taken by a aerial drone.
I attended the projection and this documentary made me feel the atmosphere of being part of a team on a small boat, in the majestic beauty of the Antarctic landscapes and with the task of collecting samples and information on a part of the continent that is largely unexplored. Six minutes of the documentary can be seen on the kickstarter link given above.
Cheers, Annick

The Academy committee for Polar Research

Belgian scientists for biodiversity studies in the Southern Ocean

The project about aerosols in SRM

Blog of the BELDIVA expeditions to Princess Elisabeth Station (2009-11)